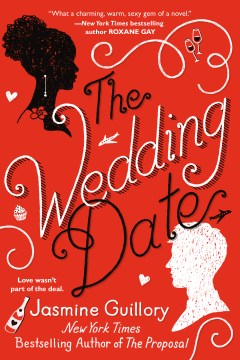 A groomsman and his last-minute guest are about to discover if a fake date can go the distance in this fun and flirty multicultural romance debut by New York Times bestselling author Jasmine Guillory—author of the Resse Witherspoon x Hello Sunshine Book Club Pick The Proposal.THE USA TODAY BESTSELLER#5 LibraryReads Pick“A swoony rom-com brimming with humor and charm.”—Entertainment Weekly (The Must List)“What a charming, warm, sexy gem of a novel....One of the best books I've read in a while.”—Roxane Gay, New York Times bestselling author of HungerAgreeing to go to a wedding with a guy she gets stuck with in an elevator is something Alexa Monroe wouldn't normally do. But there's something about Drew Nichols that's too hard to resist.On the eve of his ex's wedding festivities, Drew is minus a plus one. Until a power outage strands him with the perfect candidate for a fake girlfriend....After Alexa and Drew have more fun than they ever thought possible, Drew has to fly back to Los Angeles and his job as a pediatric surgeon, and Alexa heads home to Berkeley, where she's the mayor's chief of staff. Too bad they can't stop thinking about the other....They're just two high-powered professionals on a collision course toward the long distance dating disaster of the century--or closing the gap between what they think they need and what they truly want....One of...Entertainment Weekly’s “12 Romances for V-Day” • Cosmopolitan’s “2018 Anticipated Reads” • Elle’s “2018 Must Reads” • Harpers Bazaar’s “New January Must Reads” • The Fug Girls’ “Best Books of the Year” • Elle UK’s “Books to Get You Through 2018” • Nylon’s “January Must Reads” • Hello Giggles’ “New Release Recs” • Electric Lit’s “Books by WoC to Read in 2018” • Bitch Media’s “2018 Must Reads” • BookBub’s “2018 Romance Must Reads” • Bookriot’s “Must Read 2018 January Releases” • RetailMeNot’s “2018 Must Reads”